A while back,I decided to start using SSH for all my GIT repos. However, being a consultant, I end up being involved in a lot of different repos, for a lot of different customers. And on top of that, I sometimes write code on my spare time as well. This causes a bit of a problem when it comes to SSH. So I decided to write a a post about how you solve it. It might be obvious to a lot of people, but it might also help someone with the same problem. If nothing else, it will help me when I forget in the future…

The problem is that, by default, the SSH agent will use a single certificate for all authentication. This is fine, if you only have one identity. For example, if you only have one GitHub account, you are good to go with just one certificate. Just give GitHub the public key, and it knows that whenever it sees someone using that key, it is you. And whenever you try to use SSH with GitHub, the SSH agent will use that certificate, and all is fine.

So how do we solve that?

Well, the first step is to create a new set of keys to use with our second identity. This is fairly easy to do by running

Note: You can place your keys wherever you want, but ~/.ssh is the standard location.

The ssh-keygen command will ask for an “optional” passphrase. And I place optional in quotes here, because even if it is technically optional, I don’t think it should ever be left empty. You should definitely add a passphrase, and make it a good one! This is used for authentication, it needs to be secure!

Once you have input your passphrase twice, you will see something like this

Ok, so now we have 2 sets of keys that we can use. The default id_rsa and the newly generated id_rsa_myOtherAccount, as well as the corresponding public keys.

With the new key pair in place, we can go ahead and add the newly created public key to our second GitHub account (or wherever you need your second identity).

Once your service of choice knows your public key, we need to add the corresponding private key to the the SSH agent. And then we need to tell the agent, that it should use that new key in some scenarios. Let’s do it one step at a time

To add the new key to the SSH agent, we can run

Note: Once again, PowerShell does not support ~/ and needs the full path…

This will register the new key with the SSH agent. However, it will still default to using the default one when asked to provide a key. So we need to configure it to use the new key in some cases. This is done by creating a file called config at ~/.ssh/. On Windows, this could be done by running

In this file, we can tell the SSH agent how to behave when it sees certain hosts. So for example, I could add

This tells the SSH agent that whenever I try to talk to the host git-myOtherAccount, it should open a connection to git.com, using the username git and the key from c:/Users/<USERNAME>/.ssh/id_rsa_myOtherAccount.

Wait, what? The host git-myOtherAccount? Yes, the host entry in this configuration is basically any string that you want. It will then be replaced by whatever is set in the HostName field whenever you try to open an SSH connection to that host.

The next thing we need to do, is to make sure that we replace the host for SSH connection we want to make. In the case of GitHub, that means changing the address for any repo that we want to clone using this new key.

For example, say that you have a repo with an address of git@github.com:ChrisKlug/K8S4DEVS.git. If we use this address, the SSH agent will look at the ~/.ssh/config file to see if there is any Host with the value github.com. If doesn’t find one, it will just use the default key (id_rsa).

However, if it finds an entry with the same value, it will replace the host name with the value in the HostName field, and use the key configured for this host instead.

Note: You can use any host you want to. As mentioned before, it is just a string that is used to find the correct configuration.

I had some extra thoughts and comments that might be useful, so I thought I would throw them in here as well…

WIndows 10 comes with an SSH agent built in. So there is no need to run third party tools like PuTTy anymore. Instead, you just need to turn on the built in agent. This is done by doing the following. 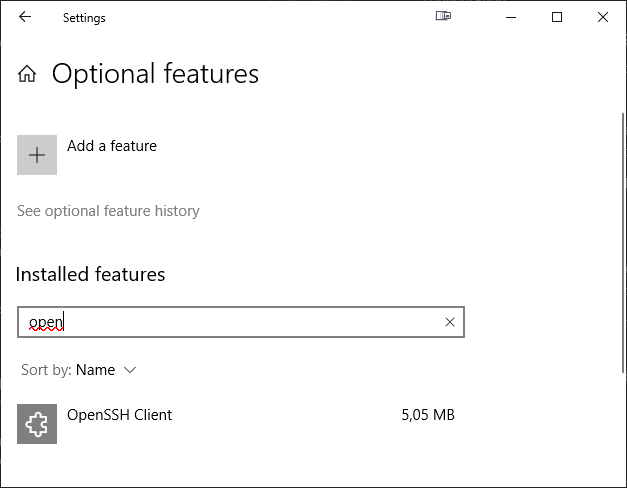 If you can’t find it, it needs to be installed by clicking on “Add a feature”. In the window that opens, search for “OpenSSH Client” and install it.

Next, open the “Services” window and look for the “OpenSSH Authentication Agent” service. Make sure that it is set to start up automatically, and that it is running. 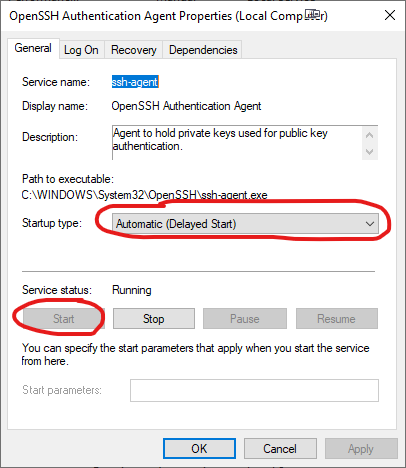 Once we know that the agent is running, we need to make sure that it is the default agent being used by the system. Git for Windows includes a bunch of extras, including an SSH set up that used to make it easier to work with on previous versions of Windows. Today, this isn’t needed as Windows 10 has pretty much all of it built in.

So, to make sure that we are actually using the Windows 10 built-in agent, open up a terminal window (cmd.exe for example) and run

This should tell you that the SSH executable is located at C:\Windows\System32\OpenSSH\ssh.exe.

Note: If it isn’t, have a look at your PATH variable to find out what path is causing it to end up at the wrong place. Once you have found it, either remove that path, or make sure you move it down so that the C:\Windows\System32 is placed before the one that causes the problem.

Once we know that the right SSH executable is being used, we should also also tell Git to use that same executable instead. This can be done by either creating a new environment variable called GIT_SSH with the value C:\Windows\System32\OpenSSH\ssh.exe. Or by setting up a Git configuration variable called core.sshCommand. Like this

That should be it! Your computer should now have a running SSH agent for you to use. You just need to add your keys and make sure you use the SSH endpoint for your Git repos!

If you are using multiple identities for your repos, it is also very likely that you want to use different user information when interacting with them as well.

By default, Git uses the globally configured name and e-mail address. However, if you have for example a private account and a work account, you probably want your commits to reflect which one you are actually using. The SSH part will only do the authentication, the commits are still created and tagged by Git.

So to update your user information for a single repo, just run

This will make a local change for this particular repo only, which makes sure that any commits you add to this repo are added with the correct information.

If you already have existing Git repos and you want to change to SSH, you just need to update the URL for the origin. This is done by executing

Note: Remember that the HOST can be either a real host, or a made up one from the SSH configuration

Once in a while, you might want to see what keys are currently registered with the SSH agent. This is easily done by running

And if you want to remove a key, just run

And finally, a tiny little warning…

and then try to clone a repo using for example git@GitHubPrivate:ChrisKlug/K8S4DEVS.git. The SSH agent will use id_rsa_github instead of the (probably) intended id_rsa_private.

To solve it, make sure you don’t override changed hosts further down the list of configurations.

That’s it for now I think. Being able to use multiple keys/identities is really useful in a lot of scenarios. But for me, it is always a pain to remember exactly how to configure it. Thus this post. I hope the information in it was useful for you as well!

For the last many years, I have used Azure to run pretty much all of the workloads I have built. And deploying applications to Azure Web Apps has been an extremely common thing.

In the beginning there was .NET Framework, and it was all very simple. But then, over time, it grew and grew, and became a lot more complicated. So, let’s have a look at