I’ve been considering writing a post about Kubernetes initContainers for a while, but for some reason I just haven’t gotten around to doing it… That’s about to change!

Let’s start by having a look at what initContainers are, and why they are useful.

Sure, you could make it part of the “main” container if you only have one, but that feels…well…a bit icky. And complicated when you have more than one container. And it could also be that it is a somewhat slow operation that could causes problems with the routing during startup, or the “synchronization” between multiple containers. Either way, having a separate container do the work before the “main” one(s) start, sounds like pretty nice solutions. And that’s where initContainers come into play.

initContainers are just containers that run before the main contianer is started.

So let’s get started!

The initContainer needs to do two things. It needs to clone the GitHub repo, and it needs to generate a static website using Jekyll. To do this, I’ve created a shell script that looks like this

It uses git clone to clone the repo. However, as the repo is private, I’m using this weird authentication scheme $PAT:x-oauth-basic. This allows me to use a GitHub Personal Access Token for authentication. And even if my PAT only gives private repo read access, it is still a credential, so I want to store it somewhere safe and not add it hard coded to my script. Because of that I’m using an environment variable to store the value, and $PAT to add it to the URL.

Next, the script sets full access to the current directory, and everything inside it, to make sure that Jekyll is allowed to read and write files, as well as create directories.

Finally, the script uses Jekyll to generate a static website from the newly cloned source code. And the result is placed in a directory called web.

That’s all there is to it!

The next step is to create a Dockerfile for the initContainer. It should look something like this

As you can see, all it really does, is to copy the script to an image that uses jekyll/jekyll as the base, and then runs the init.sh script on startup.

Once the Dockerfile is in place, I can create an image by running

And to verify that it works, I’ll just run

As you can see, I’m providing my GitHub Personal Access Token as an environment variable, and map a local path (./web) as a volume located at /srv/jekyll/web inside the container.

And since I end up with a static version of my blog in a folder called web on my host after running this command, I know that the container is working.

Once my image has been pushed to Docker Hub, it is time to create the Pod.

Crating a Pod that uses an initContainer

The first step in creating the actual Pod, is to create the Pod definition. And it looks like this

Ok, so let’s have a look at what this definition contains.

First of all, and quite obviously, it is a Pod definition for a Pod called fear-of-oblivion. It consists of 3 parts.

The first part is the “main” container, which is running the official nginx image. It also mounts a volume called web at /usr/share/nginx/html, which is the default path served by nginx. So anything put at that path will be served.

The initContainer is obviously configured to use the zerokoll/fearofoblivioninit image. But it also needs to set up an environment variable for the GitHub PAT, and mount a volume at srv/jekyll/web.

Note: A better solution for storing the PAT would be to add it as a Secret to the K8s cluster, and then use that to set the environment variable. However, as this is a demo, it’s much simpler to put it in the YAML…

Finally, the YAML defines a single volume called web. It is defined as an emptyDir, which is basically a temporary storage area that has the same lifetime as the Pod itself. This volume is the one mounted in both containers, which means that the initContainer will generate the static website inside this volume, and nginx will serve the generated content since it is mounted at the default nginx content path.

Once the YAML is done, I can create a new Pod by running

Once the port-forwarding is up and running, I can open my browser at http://localhost:8080 and get my blog 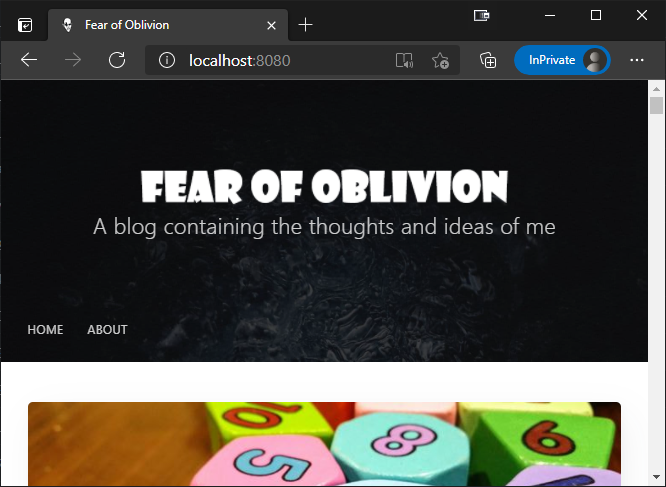 However, it’s worth noting that it can take a little while from the time you deploy the Pod until it is actually running since the initContainer needs to run to completion first. During that time, you can check the progress by running

As you can see in the STATUS column, Init:0/1 tells you that it is currently busy running the initContainers for the Pod. As soon as that goes away and the STATUS column says Running, the Pod is up and running, and ready to handle request.

You can also run

This gives you a bit more information about the startup of the Pod if you look at the Events section.

Note: Yes, I removed a ton of information from the output above as the only interesting part was the Events section.

That’s all there is to it! It’s pretty simple to work with, and still very powerful. Just like most of the best features in software development!

initContainers are a really nice way to handle any actions that need to be performed before the “main” containers in a Pod is started. It gives a very clean separation of concerns and can simplify your images quite a bit!

Obviously, this is a somewhat contrived example, but it does work! And I can definitely see a lot of real world scenarios where initContainers could perform useful tasks for us before Pod start up.

On another note, I finally managed to create a post that wasn’t a 2 hour read! Hopefully I still managed to cover everything that needed to be covered! If not, feel free to reach out and ask questions! I’m always available at @ZeroKoll!

A while back, I wrote this blog post about setting up ASP.NET Core dev certificates for both WSL and Windows. However, when running through the steps today, it didn’t work… So I decided

With .NET Core, Entity Framework is the default choice when it comes to database access. And even though it definitely is a powerful beast that can do alot of things, it is also

Fear of Oblivion
—
Using initContainers in Kubernetes
Share this